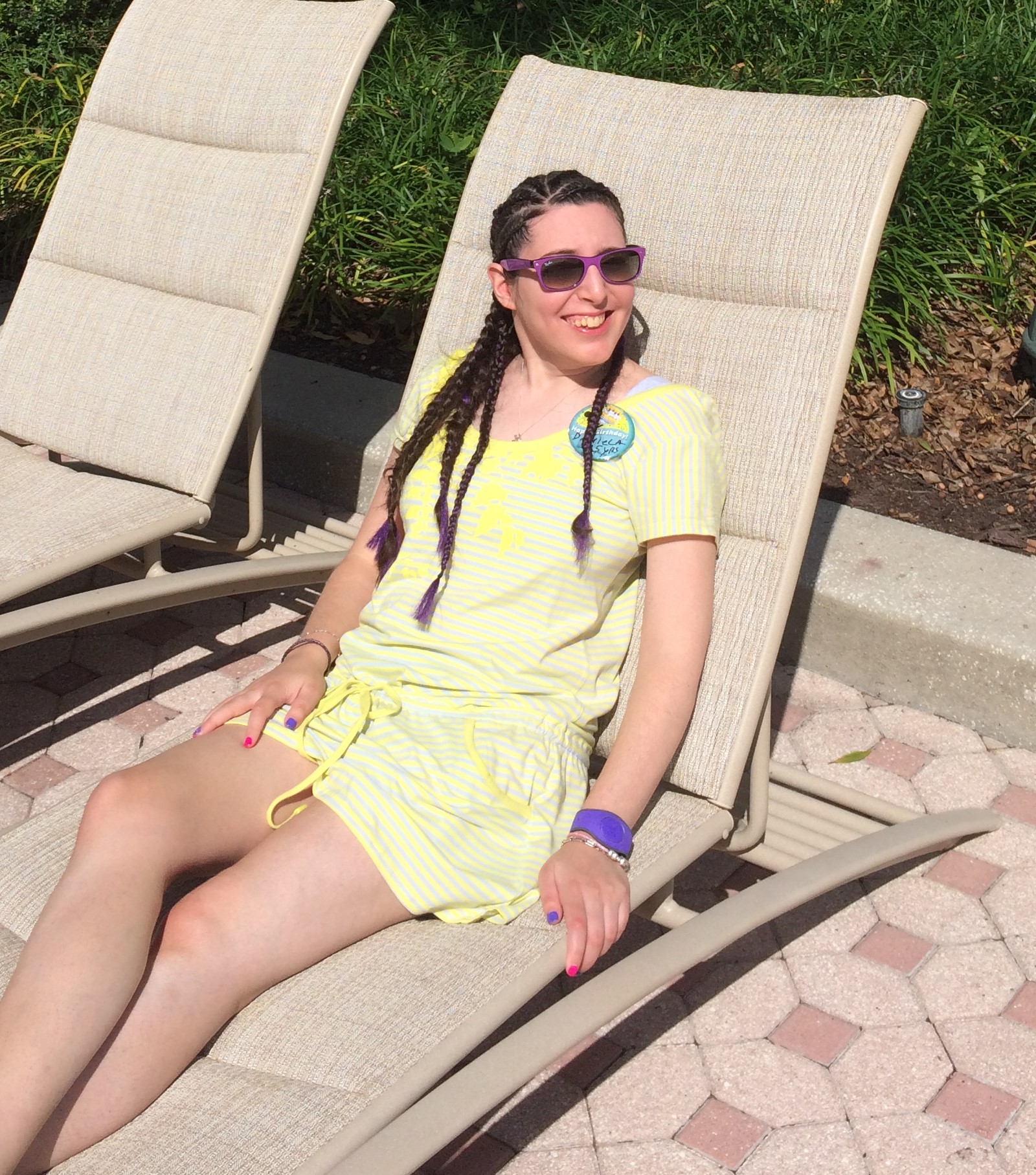 Daniela’s story….. living with the challenges of a seizure disorder

Funny thing, but I knew from conception that I was going to have a girl and I would name her in honour of my husband’s sister, may she rest in peace. My husband believed I ‘willed the baby’ to be a girl, our special angel. Little did we know how special our daughter would be!

As a first time mom, I doted on my little one…with every cry, with every whimper, I was there for her. Even when my own mom would say ‘let her cry it out…don’t pick her up right away…she has to learn to soothe herself’…thankfully I did not listen. I wanted to be with her always, to protect her, to swaddle her, to love her. And on that fateful afternoon when she cried out to me upon waking from her afternoon nap, I ran to her…I couldn’t wait to be with her. But when I went to her crib, what I found changed my life; my daughter’s life; our family life….Daniela* was lying limp, unresponsive, unconscious and soaked in her own sweat. Little did I know then that this would be the first of many seizures for my special angel!

The hours and days that followed were a blur of many firsts…our first trip to the hospital emergency…our first hospital stay….our first understanding that something was wrong with our little one. How could this be happening to us?? What was to become of Daniela?? How serious is this?? Is this going to be life changing?? So many questions and so little answers!

As the days turned to months, the visits to the hospital emergency and overnight stays became routine. Daniela’s convulsive seizures were unpredictable, frequent and difficult to control, and sometimes lasted over an hour. We began learning the neurological lingo…myoclonic jerks, tonic-clonic seizures, status epilepticus, EEGs, postictal and of course the names of the long list of anticonvulsant medications and their potential side effects.

I began to learn all I could about Epilepsy and in particular the seizure diagnosis that was given to Daniela very early on in her life…..severe myoclonic epilepsy with associated generalized tonic-clonic seizures (not a formal diagnosis but one that just described her seizure types)…..Wow what a mouthful!! All I know is that her seizure disorder was debilitating and life-threatening…it had to be affecting her brain…would she learn to walk? to talk? to feed herself? what would her cognitive development be like? could she go to school?? would she learn her ABC’s? her colours? would she be independent?? Only time would tell what the impact on her life would be from all the seizures and all the meds. We learned to cope with the challenges of her seizure disorder by adopting the phrase ‘One day at a time’. There was no sense in getting ahead of ourselves.

You can not explain your feelings when your child has a chronic illness like Epilepsy. What I would have done for it to be me having all those seizures. Daniela was helpless and vulnerable, and I knew she only wanted mommy or daddy to make things all better. Our life changed!! With each new medication, with each new treatment plan, our family had to adjust….it became all about Daniela!

And adjustments to our life were made! We needed to hire a nanny since it was difficult to find a day care that would take Daniela with her unpredictable seizures; over the years, I went from a full-time job to a greatly reduced part-time position; my husband and I would ‘tag team’ when Daniela had to be home because of her seizures so we didn’t put extra burden on our colleagues at work; there were many school meetings, case conferences and medical appointments which meant more time off work; and there were times when we would have to cancel dinners at the last second with family and friends because of her seizures, even opting out of Christmas, Easter and birthday festivities. At first we tried to be a ‘normal’ family but ‘our family normal’ was so different from other families. We realized early in Daniela’s life that routine (waking, eating, sleeping) was very important to help control her seizures.

We never lost hope that ‘the next med would be the one’ but after many anticonvulsants (a total of eight different ones tried) some reduced her seizure frequency but never afforded complete seizure control. We tried whatever treatment plan was suggested…Daniela spent four years on the ketogenic diet (a very restrictive high fat / low carb diet) only to be weaned off the diet and put on a new AED, lamotrigine, which made her seizures much worse. Thankfully, within a few months, her name came up on the waiting list for surgery to implant a vagal nerve stimulator (VNS)…again, still very hopeful that this would be the ‘magic treatment’ needed to help control her convulsive seizures.

For nearly two decades we lived with Daniela’s intractable seizures with no formal diagnosis for the catastrophic epilepsy from which she suffered. Recently, genetic testing revealed that Daniela has a mutation of an ion channel that is important in brain signalling…finally we had a name for Daniela’s severe form of epilepsy: Dravet Syndrome. Getting this formal diagnosis of Dravet Syndrome stirred up the initial feelings that we had back at the very beginning…we relived the emotions and we mourned again the loss of what ‘normal’ was to be. Immediately our thoughts went to ‘what did the future hold for our special angel with the diagnosis of this rare and life-threatening syndrome?’. There was also my constant worry about SUDEP (Sudden Unexplained Death in Epilepsy). Even before the Dravet diagnosis, I knew that this was a very real possibility since Daniela had many of the risk factors but it became even more worrisome once Dravet was confirmed. I know many families that sleep with their children, me included, so that they can monitor closely during sleep for SUDEP…death is not going to happen on my watch!! I began to learn all I could about Dravet Syndrome but this time used social media to reach out to other families living with Dravet.

With this new diagnosis came a better understanding of what we had been living with for almost the whole entirety of Daniela’s life. The Dravet diagnosis did not change the beautiful, lovable young lady that Daniela has become, but it was now easier to understand the challenges that she faced with her intractable seizure disorder…why the first three years of her life were spent with many visits to the hospital emergency because of prolonged seizures or status epilepticus; why any fever was a sure trigger for a seizure; why one of the AED’s, lamotrigine, had made her condition worse; why her speech and cognitive development were delayed; why she was diagnosed with Autism Spectrum Disorder during childhood; why the ketogenic diet and the VNS surgery bettered her quality of life; why depakene was always part of her anticonvulsant drug cocktail…… because we have learned that these are ‘typical’ in children with Dravet.

With a diagnosis of Dravet Syndrome, there is hope of better seizure control for Daniela. An orphan drug, known as Stiripentol, has been found to be beneficial for individuals with Dravet Syndrome. It is not marketed in Canada, but until recently neurologists could request access to Stiripentol for patients with Dravet Syndrome through a Special Access Program at Health Canada. However, we have been told, Health Canada has recently put a stoppage on special access and no new Dravet patients can be put on Stiripentol. This information is devastating for my family…to know that we literally missed the opportunity to get access to this ‘Dravet drug of choice’ by mere months; if a diagnosis had been made just a little bit earlier Daniela could be on Stiripentol today! And, also, it is very frustrating to know that there are Canadian families whose children are receiving Stiripentol for their Dravet but my daughter is not able to get access to this medication in Canada. Shame on Health Canada!

I am continuing to ‘fight the fight’ to get access to Stiripentol for Daniela….those who know me, know I don’t take ‘NO’ for an answer!

Recently, a potential avenue has opened to allow my family to buy Stiripentol in the United States. It seems like a ‘covert drug operation’ but I am willing to do whatever is needed to get this ‘Dravet drug of choice’ for my daughter…no matter the cost!!

And the financial cost is staggering…possibly $1000 for a one month supply of Stiripentol, but I am also worried about the burden of visits to the US every month and the toll this will have on my family. I can’t get travel insurance for my daughter so it will not be possible for Daniela and my husband to accompany me on monthly trips to the US. My family and I worry about the ‘unknown’ at the border crossing…do I disclose that I have this medication and what might the repercussions be if I don’t? And most importantly, being the primary caregiver for my daughter, I worry about being away at a crucial time…what if she was hospitalized and it was time to get her prescription refilled? Just the thought of potentially having to leave her side in the hospital to go pick up her medication in the US is agonizing. My husband and I are already overwhelmed living day to day with Daniela’s chronic seizure disorder… I do not need another burden to worry about, especially when some Canadians diagnosed with Dravet Syndrome have access to Stiripentol locally.

We are very anxious to get Daniela started on Stiripentol….this could be ‘the one’ that improves her seizure control and ultimately improves her quality of life. Everyday that she does not have access to this drug is another day when she could die of SUDEP or have a fatal injury or accident during a seizure. Getting the best possible seizure control is the key to reducing Daniela’s risk of SUDEP or accidental death. If Stiripentol can help prevent Daniela’s convulsive seizures then she should absolutely be given the opportunity for access to this medication in Canada. In the meantime, we are waiting very patiently to see if and when the possibility of obtaining Stiripentol from the United States will happen and when the script is ready for pick up, I will be ready to go! As long as there are new seizure medications and treatment options available for Daniela, there is always HOPE!!

My husband and I have always held onto the words of Daniela’s first neurologist who said in a letter that followed her into the school system, “Daniela is a young girl with great potential ready to be realized with the appropriate supports in place”. All of our efforts and advocacy for Daniela have focused on the adage ‘It truly does take a village to raise a child!’

Our hope for our daughter is just like other parents…that she grows and learns and reaches her full potential, and is an active and productive member of an inclusive society….that she is treated with dignity and respect and kindness ….that she not be defined by her disability but by her abilities….and that all her wishes will come true!

With better seizure control, our dream for Daniela is simple… to gain some independence so it would not be necessary for an adult to be constantly in her shadow for safety and support….she could finally just walk around the block with her dog or go for a bike ride or a swim or a skate without mom and dad hovering so closely….and wouldn’t it be wonderful to take my family on a long awaited first vacation to Disney World, where Daniela could finally just be a kid!